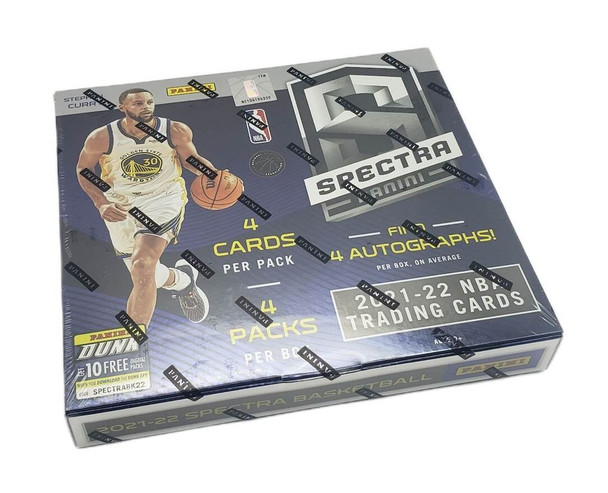 AUTOGRAPHS
Spectra returns with some highly collectible autograph sets including Rookie Dual Patch Autographs, In The Zone Autographs and Full Spectrum Signatures.
Look for a variety of parallels including Gold /10 and the One-of-a-Kind Nebula!

INSERTS
Spectra has no shortfall of SSP Inserts!
Chase a wide variety of Rare Inserts from top players including Rookies, Veterans and Retired players in Color Blast, Solar Eclipse and Diamond Anniversary!

$414.95
Bleacher Special: $274.95
The iconic Donruss brand returns the basketball calendar offering a familiar base and insert sets to collectors from the past to present. Find 1 autograph per box in Rated Rookie Signatures and the...

$624.95
Bleacher Special: $474.95
Contenders returns this year in celebration of the 75th anniversary of the NBA! Each Hobby box contains 2 Autographs, 2 Parallels, and 8 inserts/ insert parallels in every box on average. Chase on-

$324.95
Bleacher Special: $279.95
2021-22 Chronicles Basketball returns with popular set designs from years past that include the top rookie and veteran players in the NBA today!Each Hobby box contains 2 autographs per box on...

$624.95
Bleacher Special: $489.95
Continuing the celebration of the 75th season of the NBA, Select basketball returns with its opti-chrome technology and a variety of parallels, autographs, memorabilia, and insert cards to chase for...

$349.95
Bleacher Special: $299.95
Origins Football is back and features the first on-card rookie autographs of the 2022 draft class in their professional uniforms!Chase all of the best rookies ready to burst onto the NFL scene...

$624.95
Bleacher Special: $489.95
Continuing the celebration of the 75th season of the NBA, Select basketball returns with its opti-chrome technology and a variety of parallels, autographs, memorabilia, and insert cards to chase for...

$99.95
Bleacher Special: $79.95
Topps Premier Lacrosse League bursts onto the scene in its first Hobby formatted product, featuring the best stars in professional Lacrosse! Collect your favorite superstars with the 200-card Base...

$99.95
Bleacher Special: $74.95
Topps Chrome hits the pitch for the second year, with this all-new 2021/22 Topps Chrome Major League Soccer release, featuring all the top stars and rookies from throughout MLS   Collect the...

$2,749.95
Bleacher Special: $2,399.95
National Treasures returns to soccer on the Road to the 2022 FIFA World Cup! This worldwide program features 27 national teams from across the globe. Collect fan-favorite teams like Brazil, Germany,...

$599.95
Bleacher Special: $524.95
Impeccable makes its in-ring debut with WWE! Look for five autographs per box, on average!Find on-card autographs that feature some of the top Superstars and Legends in WWE history!Chase unique...