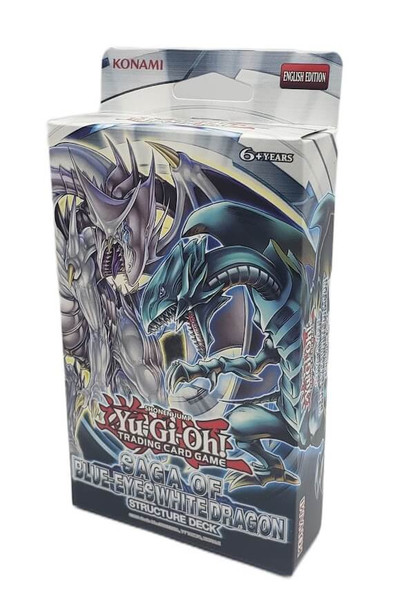 From the earliest of times, Blue- Eyes was the most powerful monster rivaled by very few other monsters. Now the legend comes to crush opponents with its new powers! Behold, the Saga of Blue-Eyes White Dragon Structure Deck built around the Blue-Eyes White Dragon card at its core. That's not all, introducing Azure-Eyes Silver Dragon, a powerful new Synchro Monster whose impact is immeasurable. Never before has a Structure Deck been released revolving around such an iconic card. Only the strong at heart have what it takes to wield this Deck to Victory.

Duelists can find additional synergy with cards from Judgment of the Light, Lord of the Tachyon Galaxy, and Cosmo Blazer booster sets!

$15.95
Bleacher Special: $12.95
Two Mythical Pokemon V are ready to battle! Choose your fighter: Deoxys V leads a team of Psychic types with its cosmic powers and Zeraora V flashes like lightning across the battlefield to hit for...

$29.95
Bleacher Special: $27.95
Finish Foes through Fusion Strike—with Mew VMAX! Team up with the adorable Mew VMAX and finish opponents with a force of Fusion Strike firepower! This Pokémon VMAX is yours in this powerful,...

$21.95
Bleacher Special: $17.99
Inspired by an encounter with his dream heroine, Tomoya seeks help from his acquaintances to make his dream of creating the ultimate dating sim a reality! Saekano: How to Raise a Boring Girlfriend...

$79.95
Bleacher Special: $71.95
Don't miss this chance to power up your deck! Every pack you purchase has a chance to 'contain a foiled SP or SEC card! *Please be informed that the artwork for the SP and SEC cards have been...

$79.95
Bleacher Special: $71.95
Inspired by the encounter with this dream heroine, join Tomoya in his fun-filled journey to realize his dreams of creating the ultimate dating sim! Together with the support of his friends, Tomoya is...

$124.95
Bleacher Special: $99.95
Leaf is pleased to announce a fantastic value priced repack product, 2022 LEAF MULTI-SPORT SOLO PACKS. This repack is designed to transparently allow collectors a chance to be part of Leaf's buyback...

$149.95
Bleacher Special: $119.95
2022 Chronicles Baseball will deliver a variety of inserts and parallels from over 20 different programs for a unique collecting experience.Look for players to be featured on 4 different substrate...