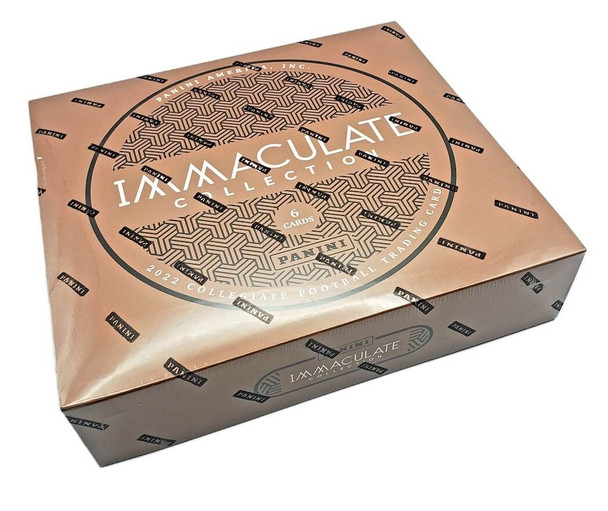 4 Autographs
1 Memorabilia
1 Base or Parallel
ROOKIE PATCH AUTOGRAPHS
Find Rookie autographs paired with a collegiate jersey swatch of the top picks from the 2022 NFL Draft.
Look for parallels numbered to 1 featuring Conference Logos, Brand Logos and Bowl Patches.
Look for Team Slogan Signatures, which include school motto’s on a jersey swatch background with an on-card autograph.

ALL-TIME GREAT SIGNATURES
All-Time Great Signatures features some of the greatest to play on the college gridiron.
Find autographs of veterans and Hall of Fame players from decades past!

ROOKIE AUTOGRAPHS
The hottest rookies of the 2022 draft class have arrived!
Find autographs of this year’s top NFL hopefuls in Immaculate Rookie Autographs with a range of parallels!

IMMACULATE TRIOS AUTOGRAPHS
Collect not one, not two, but three autographs with Immaculate Trios Autographs!
Each card features three autographs from this years top rookies.
Look for team combos and three of the best position players on the same card!

IMMACULATE MONUMENTS
Immaculate Monuments highlights some of the greatest players to play for their schools!
Each card features four jersey swatches from some of the best to play the game!
Look for parallels with prime jersey swatches!

BASE
The base set highlights vets and rookies, found in multiple parallels numbered as low as 1!

$1,099.95
Bleacher Special: $749.95
Immaculate UFC debuts with Panini’s first on-card autographs of the greatest UFC athletes, past and present!Look for 3 Autographs and 2 Memorabilia cards per box, on average!Collect a plethora of...

$2,499.95
Bleacher Special: $1,999.95
Look for on-card autographs of all the top rookies and legends the NFL has to offer. Find some of the first on-card patch autographs of Trevor Lawrence, Zach Wilson, Justin Fields and many more!Hunt...

Bleacher Special: $274.95
2022 Immaculate Baseball delivers autographs from today's stars and yesterday's legends in a variety of ways like on-card, acetate, and eye-black!Hunt for memorabilia from some of the game's greatest...

$89.95
Bleacher Special: $71.95
2022 Topps Pro Debut continues to grow as a marquee destination to find the brightest stars of tomorrow with all the biggest names from throughout MiLB!Collect the entire 200-card Base Set including...

Bleacher Special: $474.95
2022 Gold Standard football is loaded with all the top rookies, veterans, and retired stars the NFL has to offer.Look for Rookie Jersey Autographs of all the top drafted 2022 Rookies! Also find the...

$119.95
Bleacher Special: $99.95
2022 Topps Pro Debut continues to grow as a marquee destination to find the brightest stars of tomorrow with all the biggest names from throughout MiLB! Collect the entire 200-card Base Set...

$299.95
Bleacher Special: $237.95
2021-22 Chronicles Basketball returns with popular set designs from years past that include the top rookie and veteran players in the NBA today!Each Hobby box contains 2 autographs per box on...

$99.95
Bleacher Special: $89.95
5 Prizms Per Box on Average Look For Autographs From The League's Top Players Look For The Ultra Rare Vigor Insert!

$69.95
Bleacher Special: $61.95
The official and exclusive sticker collection of FIFA World Cup Qatar 2022! Each of the 32 teams participating in the tournament will be featured on its own spread of pages, where collectors can...

$49.95
Bleacher Special: $44.95
Be dazzled once again by your favorite talents from hololive production as they take to the shining stages of Weiß Schwarz, this time with new friends making their debuts! Don’t miss out...