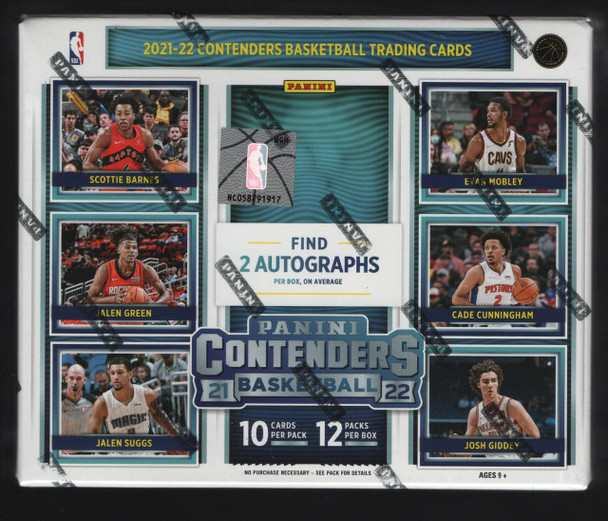 Contenders returns this year in celebration of the 75th anniversary of the NBA! Each Hobby box contains 2 Autographs, 2 Parallels, and 8 inserts/ insert parallels in every box on average.
Chase on-card autographs of this year’s top rookies in the highly anticipated Rookie Ticket Autographs!
Find autographs from some of the best players of the game in Veteran Season Ticket! Look for a variety of parallels including the Premium Edition Gold Vinyl (#’d/1)!
Collect the various inserts this year in Contenders, including the rare Hobby exclusive Permit to Dominate and License to Dominate!
2 AUTOGRAPHS
2 PARALLELS
8 INSERTS OR INSERT PARALLELS
ROOKIE SEASON TICKET
Chase after on-card autos of the top NBA Rookies from this year’s draft such as Cade Cunningham, Jalen Green, Jalen Suggs, and many more!
VETERAN SEASON TICKET
Find on-card autographs of some of the top superstars and legends of the games in Veteran Season Ticket and various parallels!
Inserts
Find Hobby exclusive inserts including Lottery Ticket, Superstars Die Cut, Suite Shots, Rookie of the Year Contenders, MVP Contenders, Legendary Contenders, and the rare Permit to Dominant and License to Dominant!
View AllClose

$374.95
Bleacher Special: $239.95
The iconic Donruss brand returns the basketball calendar offering a familiar base and insert sets to collectors from the past to present. Find 1 autograph per box in Rated Rookie Signatures and the...

$574.95
Bleacher Special: $447.95
Origins is back for the 2021-22 NBA season! Look for a stunning display of Autograph, Memorabilia and Insert/Parallel Content! Find 2 Autographs or Memorabilia cards per box, including one Rookie...

$1,199.95
Bleacher Special: $874.95
The most popular release of the year, 2021-22 Prizm Basketball is back with familiar highly sought-after parallels, inserts, and autograph content. Find 2 Autographs per Hobby box in Sensational...

$214.95
Bleacher Special: $147.95
A familiar brand to the basketball community, Revolution makes its return for another season offering collectors a variety of autographs, parallels, and inserts to chase! Chase after randomly...

$299.95
Bleacher Special: $209.95
Offering some unique and art-based designs, Court Kings returns in celebration of the 75th NBA season One autograph per Hobby box can be found from the top rookies to the legends of the game...

$29.95
Bleacher Special: $19.99
$23.99
This is the latest addition in the TWO-PLAYER STARTER SET line-up, featuring FINAL FANTASY IV. Included in the set are two preconstructed decks: the first is a Fire/Earth deck focusing on Golbez and...

$99.95
Bleacher Special: $62.95
Revolution makes its WWE debut offering collectors a wide variety of autographs, parallels, and inserts to chase! Chase after randomly inserted autographs from the top Superstars and Legends across...

$169.95
Bleacher Special: $154.95
2022 Topps Gypsy Queen once again blends a beautiful arrangement of unique designs with an astounding checklist of the game's top players and rookies! Look into the future with all-new Crystal...

$524.95
Bleacher Special: $439.95
Crown Royale returns with its one-of-a-kind die-cut designs and an incredible selection of Inserts, Parallels, and Autographs! Find 1 autograph per box of the top NBA superstars, legends, and...