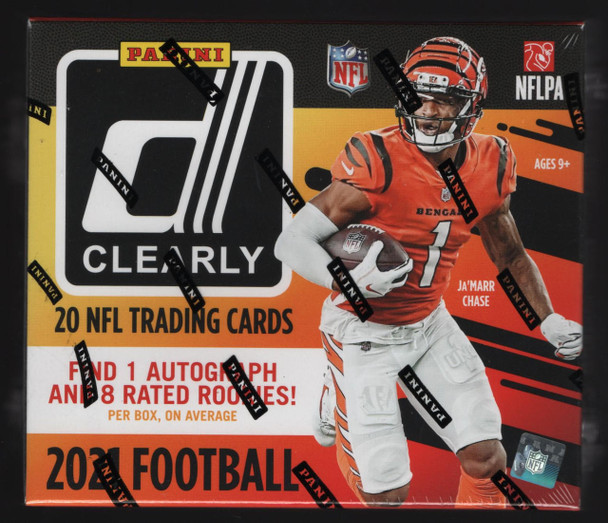 One of the most anticipated releases of the year, 2021 Clearly Donruss is loaded with all acetate autographs, parallels and inserts from the best of this year’s stellar rookie class!
Look for Clearly Rated Rookie Autographs from Trevor Lawrence,Trey Lance, Justin Fields, Mac Jones and many more!
Search for fan-favorite inserts and their autograph parallels in Clearly My House!, Clearly The Rookies, Clearly Out of this World and Clearly Dominant!
Chase Rated Rookie tribute cards that feature acetate re-creations from some of the most iconic rookies in the NFL’s recent history from stars such as Peyton Manning, Kyler Murray, Aaron Rodgers and many more!
Hunt for case hit acetate inserts in Gridiron Marvels, Night Moves and Downtown and their 1/1 Holo Platinum parallels.
Box Highlights
1 AUTOGRAPH
1 INSERT
2 PARALLELS
8 RATED ROOKIES
8 BASE
BASE
Collect a 50-card all-acetate base set, which features the brightest stars from today’s NFL landscape!
RATED ROOKIE HOLO GOLD
Chase a 50-card Rated Rookie checklist, which is loaded with the top talent from this year’s stacked draft class!
CLEARLY RATED ROOKIE AUTOGRAPHS RED
Look for one of the most iconic rookie cards of all time with a bold autograph in Clearly Rated Rookie Autographs!
CLEARLY THE ROOKIES AUTOGRAPHS
An acetate spin on a fan favorite rookie card, look for Clearly The Rookies, as well as its autograph parallel!
CLEARLY OUT OF THIS WORLD AUTOGRAPHS
Be on the lookout for Clearly Out of this World inserts and its many parallels, which includes a far out autograph parallel!
CLEARLY RATED ROOKIES 2017
Paying homage to some of the most iconic rookie cards in the NFL’s recent history, be on the lookout for autographs from some of the NFL’s biggest stars such as Patrick Mahomes II, Dak Prescott, Josh Allen and many more in an all-new, acetate version of their Rated Rookie card!
GRIDIRON MARVELS
The NFL’s biggest heroes are back and better than ever in acetate form, landing at one in every third case, on average!
NIGHT MOVES
Catch some of the NFL biggest names in another fan favorite, this time printed on acetate, in Night Moves! Odds are one in every third case, on average!
DOWNTOWN
One of the hobby’s favorite SP inserts debuts in Clearly Donruss Football which features creative city driven artwork behind some of the NFL's top stars!
Downtown Holo Platinum 1/1
View AllClose

$174.95
Bleacher Special: $124.95
Find on-card autographs from all the top rookies and prospects in Rated Rookies Signatures and Rated Prospects Signatures! Hunt for newly designed inserts sets like Lights Out and T-Minus 3...2.....

$414.95
Bleacher Special: $274.95
The iconic Donruss brand returns the basketball calendar offering a familiar base and insert sets to collectors from the past to present. Find 1 autograph per box in Rated Rookie Signatures and the...

$1,599.95
Bleacher Special: $949.95
One of the most anticipated releases of the year 2021 Donruss Optic is loaded with on-card autographs, parallels, and all the best rookies the NFL has to offer. Look for on-card Rated Rookie...

$399.95
Bleacher Special: $247.95
From the hottest new rookies to the biggest stars in the NFL, you will find something for everyone in Donruss Elite Football. Chase some of the first Rookie Cards with updated NFL marks and...

$249.95
Bleacher Special: $179.95
6 Packs Per Box - 8 Cards Per Pack   3 Autographs and 1 Memorabilia Card   Chronicles Draft Picks is back with a plethora of the best Panini brands of the most sought-after players...

$624.95
Bleacher Special: $474.95
Origins is back for the 2021-22 NBA season! Look for a stunning display of Autograph, Memorabilia and Insert/Parallel Content! Find 2 Autographs or Memorabilia cards per box, including one Rookie...

$324.95
Bleacher Special: $219.95
Offering some unique and art-based designs, Court Kings returns in celebration of the 75th NBA season One autograph per Hobby box can be found from the top rookies to the legends of the game...

$599.95
Bleacher Special: $474.95
Limited is back in 2021, featuring beautiful RPAs of the top rookies from the hyped 2021 draft class!Collect the beautiful Ring of Honor Autographs insert, featuring some of the biggest names in...

$699.95
Bleacher Special: $549.95
Chase the iconic Rookie Tickets which feature on-card autographs from all the best and brightest young talent the NFL has to offer which include Trevor Lawrence, Justin Fields, Najee Harris,...

$399.95
Bleacher Special: $299.95
2021-22 Donruss Elite Basketball makes its return to the hardwood with a loaded lineup of Insert and Parallel content, along with a strong selection of autographs!Chase the popular Status and...

$96.95
Bleacher Special: $34.95
Find the biggest NFL stars of today and tomorrow in the 2021 edition of the NFL Five Trading Card Game! Each box delivers 4 Epic, 1 Legendary and 1 Rookie card along with 7 Swirl-o-Rama...