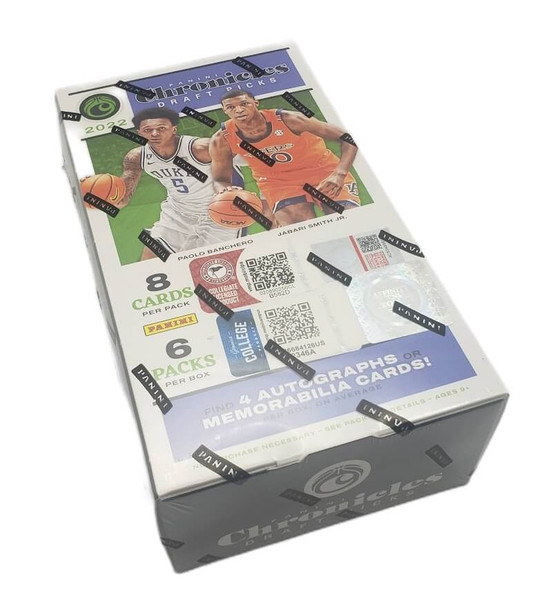 Chronicles Draft Picks makes its anticipated return to College Basketball with plenty of the top prospects of the 2022 NBA Draft!
Find 2 Autographs, 2 Memorabilia, 2 Spectra, 16 Holo and 8 Opti-Chrome cards per box on average!
Look for the most spectacular designs in the hobby randomly inserted in each hobby box!
Chronicles Draft picks features the hottest rookies including Paolo Banchero, Jalen Duren, and Jaden Ivey!
Look for your favorite NBA legends, rookies, and current stars, repping their college uniforms!

AUTOGRAPHS
This year’s Chronicles Basketball has some of the hottest rookie autographs from the 2022 NBA Draft.
Look for signatures of the biggest college stars in their college uniforms. Some of the top players include Johnny Davis, AJ Griffin and Keegan Murray!

AUTOGRAPHED MEMORABILIA
Looking to pull that awesome patch autograph? Look no further than this year’s Chronicles Draft Picks.
Find some of the coolest memorabilia from standard jersey pieces, all the way to team logo Patches!

BASE SETS
2022 Chronicles Draft Picks is filled with color!
Chronicles is bringing some of the most sought after sets in all of basketball.
Look for the classic Rated Rookie design, Recon base with multiple color parallels, and Spectra inserts with psychedelic patterns such as Aura and Nebula!

$349.95
Bleacher Special: $289.95
2020-21 Chronicles Basketball returns with popular set designs from years past that include the top rookie and veteran players in the NBA today!Find 2 autograph cards per box of the top NBA stars and...

$149.95
Bleacher Special: $114.95
2022 Chronicles Racing features all the top drivers across multiple fan-favorite brands to give collectors numerous sets and parallels to hunt for!

$324.95
Bleacher Special: $279.95
2021-22 Chronicles Basketball returns with popular set designs from years past that include the top rookie and veteran players in the NBA today!Each Hobby box contains 2 autographs per box on...

$1,099.95
Bleacher Special: $899.95
One of the most popular opti-chrome products of the year, Spectra, returns to deliver popular card sets and parallels loaded with autograph content!Each pack contains 1 Autograph and 1 Parallel...

$99.95
Bleacher Special: $79.95
Topps Premier Lacrosse League bursts onto the scene in its first Hobby formatted product, featuring the best stars in professional Lacrosse! Collect your favorite superstars with the 200-card Base...

$99.95
Bleacher Special: $79.95
2021/22 Topps Inception Overtime Elite provides collectors with the first-ever autograph/relic hybrid product for Overtime Elite, with this beautifully designed set featuring all of the...

2021-22 Panini One and One Basketball Hobby Box

$1,099.95
Bleacher Special: $974.95
Continuing the celebration of the 75th season of the NBA, Select basketball returns with its opti-chrome technology and a variety of parallels, autographs, memorabilia, and insert cards to chase for...

$349.95
Bleacher Special: $299.95
Origins Football is back and features the first on-card rookie autographs of the 2022 draft class in their professional uniforms!Chase all of the best rookies ready to burst onto the NFL scene...